Budgetary policy and macroeconomics - Macroeconomic model building and forecasting
16.05.2022 Dmytro Boyarchuk, Executive Director of CASE Ukraine, spoke about the damage to the economy from Russia at a panel organized by Cornell University.

On May 13, 2022, the Center for Social Economic Research CASE Ukraine took part in the panel “Ukraine: war, economy, path to rebuilding“, organized by Cornell University (21st place in the QS World University Rankings 2022).

Dmytro Boyarchuk, Executive Director of CASE Ukraine, presented indicative estimates of the damage to the Ukrainian economy from the Russian invasion.

We can only very roughly estimate the damage for Ukrainian economy from Russian invasion. Naturally, the total economic system was affected. However, different sectors of economy experienced different depth of problems.

I want to start with this picture. Military actions in March. Active fights were in the regions which produced up to 60% of GDP. It does not necessarily mean that 60% of GDP were eliminated in those areas. But also it does not mean that the rest of the countries nothing was affected. Missiles strikes were in all regions and they still continue.

Here you can see the situation for now. Active military actions are in the regions which produced up to 20% of GDP before the war.

However, a lot of destructions. For instance, we have no idea what happened to industry. No reports on industrial output from the start of the war. I guess, because the number might be too impressive.

No information on retail trade which is a proxy for consumption. For instance, large cities like Kyiv and Kharkiv they did not experience large destructions but people from those cities fled to the west or other countries. And services were substantial part of the economy. We have no idea how trade and other services plunged. The same story as with industrial output – no reports.

Agro-production was affected relatively modestly. Near 70-80% of sawing areas remained under control of Ukrainian authorities and new harvest will be near 20-30% less than last year which was a record high.

Even IT-sector was damaged. The sector which was expected to be the most resilient. IT companies report that western partners very often put project on pause due to compliance reasons. Ukraine is in war and it creates risks of non-delivery. Export sales of IT sector dropped 4% in March which might be seen as small contraction. But in January and February IT exports was booming more than 30% y/y. So if we compare to the pre-war dynamics the decline is also strong.

Millions of Ukrainians left the country. The UN tells about 6 million people. Primarily women, children and end elderly people. Near 700 000 people are in the army now in different forms. Territorial defense, National Guards etc.
It’s a loss both of retail sales and labour force as well. Officially Ukraine was reported to have 42 million inhabitants but in reality population is much lower.

Only 12.8 million Ukrainians were officially employed. Today is saw a report that near 5 million people lost their job due to the war.

Many players practice in estimating costs of damages. The NBU talks about $92 billion losses. The final cost for reconstruction varies from EUR 200 billion up to EUR 1 trillion. EUR 1 trillion is the estimate from Ukrainian authorities. Foreigners give less ambitious numbers. Expectations for repayments from Russia but the mechanism is not clear for now.

Restrictions for exports. Seaports are blocked. Capacities to export via railways are very limited. And in case with grain exports we have the situation that Ukraine has enough grain for internal consumption and we have sufficient stocks for exports. But we cannot ship all those stocks of grain to the market. As a result, this means a big threat for the countries dependent on food supplies. The UN even talks about the threat of hunger in some countries. Today we had a discussion with officials on what could be done and the answer is – only military de-blockade of Ukrainian seaports. No other way to unlock grain supplies over the upcoming months. 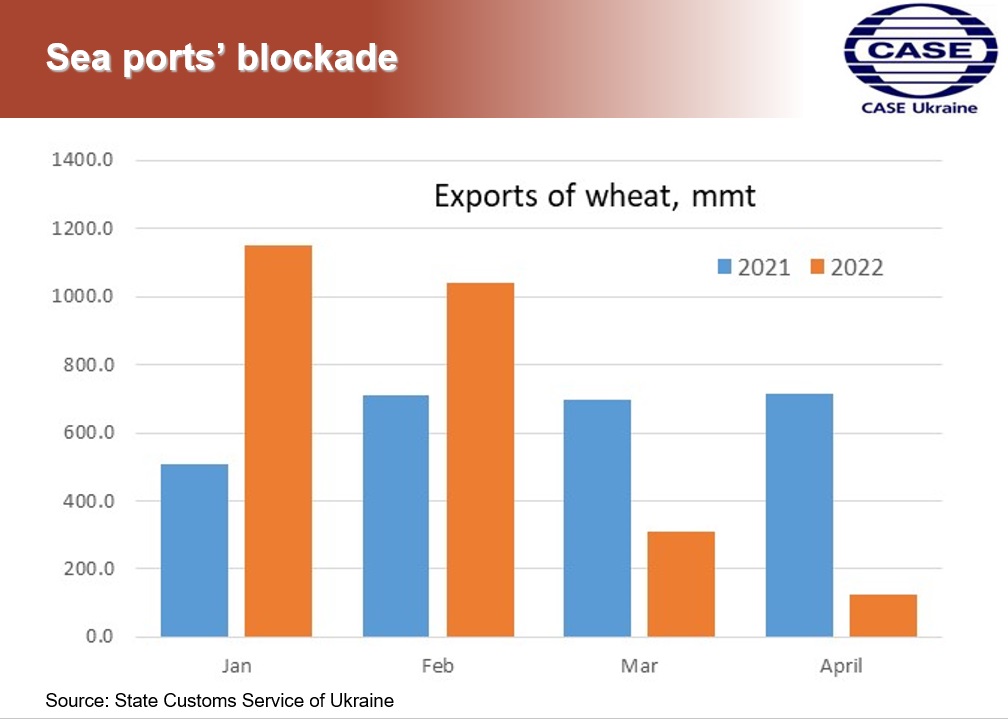 Budget revenues are falling. Spending are growing. In March deficit was relatively modest since many companies paid in advance and there were still funds from pre-war life. But already in April budget deficit was incredible sum of $5 billion and this level of deficit is expected to persist further on. Pre-war GDP was $200 billion. Deficit per month is 2.5% of GDP per year. 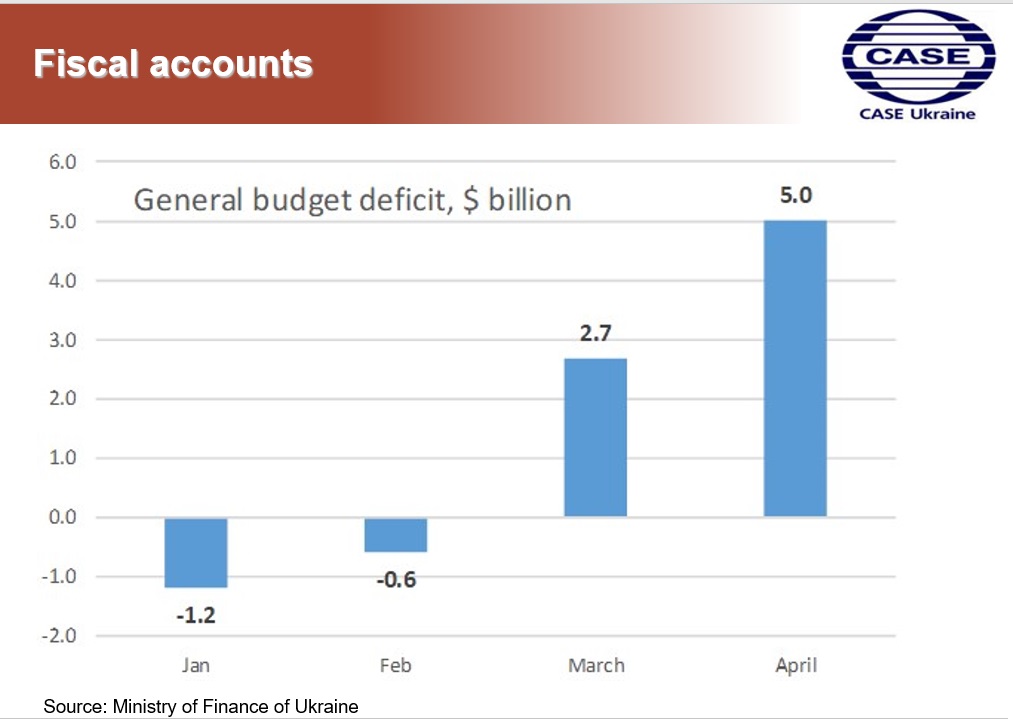 Program for relocation of companies. The size of the companies is not clear. Near 500 companies moved to safer places. Near 300 companies continued their work after re-allocation.

To sum up the damage is really strong. Much stronger than damage of Russia from sanctions. Need for rebuilding in the future. But a big problem to keep people in Ukraine. For safety reasons we should expect new waves of migration of Ukrainians because Russian aggression will not end even when Russian army will be defeated this time.